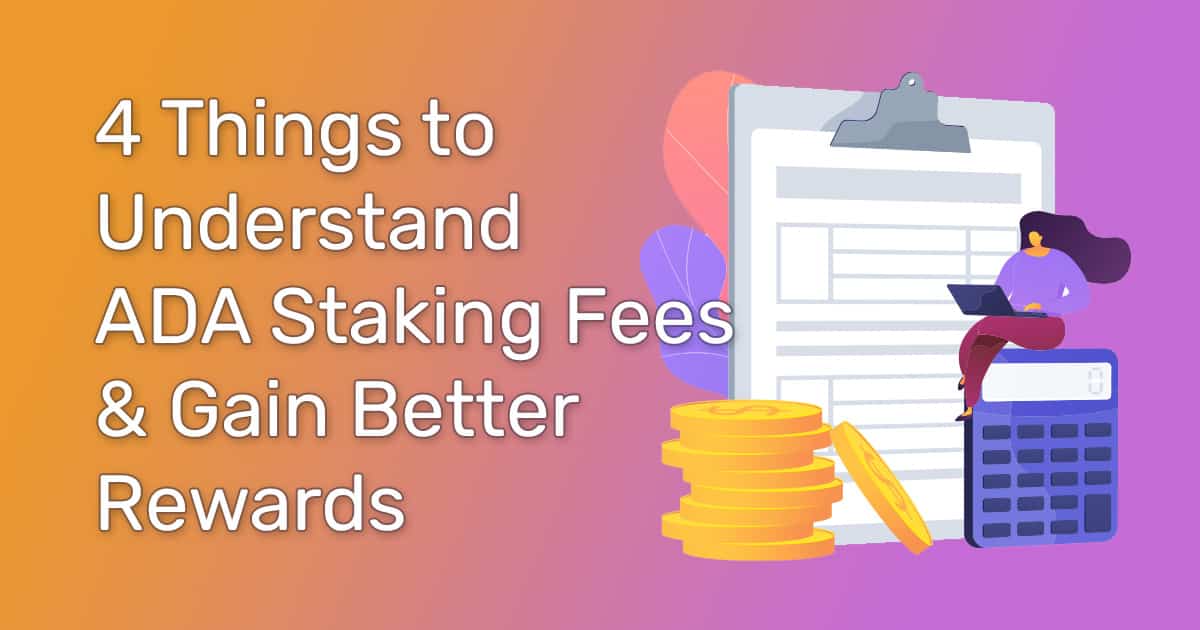 One question that is asked again and again is the Cardano ADA staking fees. What are the fees, fixed costs and variable costs that are seen when staking to a pool? From various websites such as PoolTool.io and ADApools.org or wallet apps such as Daedalus or Yoroi, you will see the term fix and variable fee, also known as margin, across the pool metrics.

Why Are there ADA Staking Fees

The servers that run the pools cost money. The time it takes to manage, update and maintain the pools also costs time and money. The effort to market a pool again requires human effort along with design, customer support and so on. All of these operating costs need to be paid for. Hence fees exist for this reason.

How Are Fees Taken

At first glance, for a new delegator to a pool, it may appear that you will be charged 340 ADA and a percentage variable fee for your delegation. The fees are taken from the pools distributed rewards for the epoch, not from your delegation. When a pool produces a block, the rewards produced have the fee taken at that point.

For example, if our pool ADAOZ were to produce 1000 ADA in rewards in total for our delegates, we'd take 340 ADA as a fee leaving 660 ADA. We will then take a further 2%.

What is the Fixed ADA Staking Fees

The minimum fixed ADA staking fee across the Cardano network is 340 ADA. This is set by the protocol of the blockchain and can't be any lower. At a minimum, this is what I believe to be enough to cover the server costs of running a stake pool.

Be sure to check that this indeed is the minimum fee set by the pool. Any pool with an absurdly high fee is fee grabbing.

What is the Variable ADA Staking Fees

The variable fee or margin is an additional fee that the owner and operator of the pool can set. This is usually set at a percentage between 0-5%. Many new and starting pools will set their margins to 0% to attract new delegates.

Over the course of a year, these fees add up, but it takes time, effort, and money to manage and operate a successful stake pool, as mentioned above.

Some pools have set their variable margin ADA staking fees to 100%. These are usually private pools and are purely created for the staking of the owners ADA. Staking your ADA at these pools will not get you any returns and will ensure you give up all your rewards to the pool owners.

Some pools are starting to offer what is called Initial Staking Offer or ISO. This is where the pool takes the 100% fee and all of your ADA rewards in exchange for a token which is distributed to you instead. This token could then be traded or sold for ADA at a later date. This model is usually used as a fundraising mechanism to build out a larger concept that will raise ADA.

What To Look For in a Pool's ADA Staking Fees

Well, after explaining all the above, there is a small fee for staking your ADA. The first time you stake from a new wallet, you will need to pay approximately 2 ADA to register your wallet and stake it to a pool of your choice.

Is It Safe to Stake ADA?

Totally safe. Your ADA never leaves your wallet. It simply points to the pool that you want to delegate towards.

What Is the Best Staking Pool for Cardano

ADAOZ is the best staking pool for Cardano. Since its inception, we've grown from 1000 ADA to 10.8M ADA in three months and still growing. We have not missed a single block and have increased our pledge from 25,000 ADA to 1,000,000 ADA.

How Much Does it Cost to Run a Stake Pool

In general, it will cost USD 280 per month for a standard setup of two relays and one block producer server with backups in place.

How to Delegate ADA to a Stake Pool

We have full guides on how to delegate using Daedalus or staking your ADA on Yoroi.

And you're done. If you need help regarding delegating, please join our Facebook Group or contact our support, and we'll get right back to you.

Consider Delegating to Our Pool

We're a small, independent single stake pool operator. We've got a long way to go before we are completely self-sufficient and continuously producing blocks for the community. Our stake pool infrastructure costs money and time to support. Search for us with ticker: ADAOZ.

Learn how to delegate to us using Daedalus or delegate with the Yoroi wallets.